Well the title was a hyperbole. Now that I have got your attention let us get started. It might be stretch as of today that we can kill twitter. But in this post I would like to show that it many not be impossible after all, at-least in a couple of years.

A few things to know before we start killing twitter.

It starts with realising the you are doing a favour to twitter and twitter is not doing a favour to you. Yes I agree that twitter has been a great tool and it even led to many Arab Spring. Checkout Social Media Made the Arab Spring, But Couldn't Save It for further details.

But we need to realise that while these are the pleasant side-effects of twitter/social media, for a service or business to be sustainable it has to be profitable or at-least should have the profit generating potential in the future. Irrespective of whether the services is following a ad revenue based model or freemium model one thing is in common. Either you have to pay up for the services or the service needs to sell something to somebody.

Understanding what is that something that is sold and to whom it is sold is important.

Most of the social media users forget the value they are adding to the networks. It is easier for us to see a blog post or a video as as data/content. But we fail to realise that even the short status updates that we do on and our comments on them in social media websites are also content.

Every action that we do on social media is valuable and it adds to the valuation of the platform. How much is that action valued and how is it valued requires a detailed analysis (Will be following up this post with couple of related posts about this topic). But for now let us understand this much.

Every action that we do on a social media website falls into one of the following categories.

I have tried to highlight the same in this tweet of mine.

It is difficult for people to understand this as they cannot see it clearly or rather there is no way for them to understand this. It only becomes clear in some conversations like the following. In February this year when aantonop was complaining about how facebook was locking him out, one of the users mentioned this. 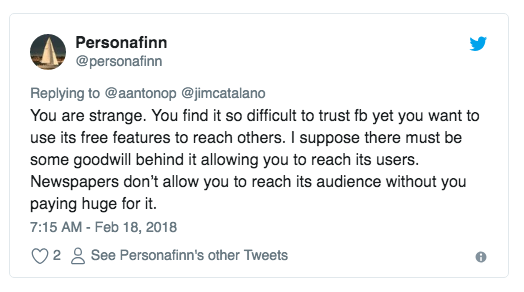 What is your data worth?

Data and the value it creates is has different lifetimes and there are lot of overlaps. So it is difficult to put a value to it. Let use a very crude way to identify the average minimum value of our data on Facebook. Facebook is valued at 600 Billion USD today. There are around 2 billion users on Facebook. Since Facebook makes money primarily by showing ads or/and selling your data :P , data created by each user should be worth at-least 300 USD.

How Much Is >Your< Data Worth? At Least $240 per Year. Likely Much More.
This is the first article in a series of posts that addresses the value of personal data.medium.com

One thing that everybody seems to agree is that data is the new oil and it is valuable. But what most of us fail to understand is that oil has a single lifecycle but whereas data has multiple life-cycles. So any valuation you put to a data piece is only a moving value that is affected by various parameters. We also need to realise that data that we consider archived or stale also revenue generating potential in the future. AI models will need a lot of data going forward and will unlock the revenue generating potential of your data. In the following article you can checkout how Bottos and Databroker DAO or unlocking the potential of data from various sources.

Data Monetization: 2 untapped ways to monetize your data, no matter what size it is
Data is everything and everything is data. In this data-driven world, the absence of data would lead to a collapse of…www.bitfolio.org

The two ways to realise the true value of your data

There are two ways you will realise that your data is worth something.

One : Have somebody like Zuck sell your data and make billions in the process.

Two : look at the real money people make with data.

1. When your data is sold

Cambridge Analytics expose happened on March 17, 2018. This expose made it clear that the user targeting is not just for ads and can be used for much more. There were serious concerns about users’ privacy. The expose once again proved that privacy is dead. What is more disturbing is that experts expressed that this might have a serious effect on Facebook’s future valuations. But that turned out to be completely false. Can you spot the dip in Facebook marketcap because of this scandal? I have highlighted this in red circle for you towards the right end of the graph. This is what I would call “A major dip in the short term but a minor blip in the long term”. The quick correction back to the trend line only suggests that nobody takes privacy seriously any more.

2. When you look at real money people make with your data

I am sure that Andreas M. Antonopoulos knows the value of data. I am just taking this example as it was a high profile case where data created elsewhere was able to generate revenues in some other platform because of the data distribution. The interesting thing is that in this case the money made was being used for translating aantonop’s videos to other language. You can read more about it here.

Aantonop made the above post which can be called as “Proof of Identity” post verifying that he is the real aantonop. The post gathered a lot of attention and has rewards of 1449 USD. I just hope that Aantonop claims the amount one day and starts using Steem more frequently.

I took Aantonop’s example because he is very popular in the world of Bitcoin and his videos have helped many entrepreneurs to take a plunge into Bitcoin. His videos are proof that well made content has a long shelf life and has revenue generating potential even outside the platforms that the content was created in.

Now lets gets back to our original question.

I don’t need another social network.

I first got to know about Robert Scoble from Google+ days. I invited him to checkout Steemit platform and he replied with “I don’t need another social network.” Today we are in age where we have a social media overload. The new social media platforms needs to cross the critical mass for all the others to follow up. Replacing Facebook might be impossible for the next few years but we might have a chance to replace twitter with a decentralised version. Facebook has too much of a lead. It has your photos, videos, friends, memories, groups and pages. Any new entrant needs to address all these to overcome Facebook. Whereas with respect to twitter a limited feature set with additional benefits should be able to sway the needle in the new entrant’s favour.

So for now let us assume given enough motivation users might consider shifting to the new platform.

Twitter is huge. Twitter has first mover advantage. Yes that might be the case. But last year has proven the with right incentive models you can have a jumpstart. Binance became the fastest unicorn in history.

From Zero To Crypto Billionaire In Under A Year: Meet The Founder Of Binance
Changpeng " CZ" Zhao CEO, Binance Crypto Net Worth: $1.1 billion-$2 billion* Seven months ago Binance didn't exist…www.forbes.com

Crypto Exchange Binance is More Profitable than Germany's Biggest Bank
This year, in the first quarter of 2018, Deutsche Bank, Germany's biggest bank and one of Europe's leading financial…www.ccn.com

So don’t be surprised if a new entrant replaces bitter in less than a year.

Show me the money

Attributing a value to content is a tough task. There have many unsuccessful attempts in the past. I think Steem blockchain has come further than any other attempts. By incentivising both content creation and content curation steem has figured out a subjective way to attribute value to content. With the release of SMTs later this year the community will only get better at arriving at closer estimations for the value of posts. When people were told that their content is worth something they were not able to relate to it. With platforms like Steem having put definitive value to content and having paid the same to the content creators (which many have en-cashed to to FIAT) the idea is more palpable now. Monetary incentives can do wonders and as more people get to know about these platforms the effect will only get compounded.

To be a serious contender to twitter the new platform needs to hit the critical mass. This can be the real challenge. So here are the things that can be done.

I am not sure what will be the legal issues surrounding an attempt like these. But I think this is something definitely worth trying. A few crypto-millionaires coming together should have enough funds to try something like this. What do you think? Will an attempt like this work? Share your thoughts.

How Blockchain can help the Media Industry