Build your CI/CD pipeline with AWS Elasticbeanstack, Codepipeline and Cloudformation

Building an Immutable Infrastructure is the ultimate goal of this solution. Reusability of code for creating a similar environment in a short duration of time and more developer-friendly is another aspect of this solution. AWS Cloudformation is the orchestrator for provisioning and maintaining the infrastructure through infrastructure as code. The entire infrastructure can be created by executing a single template. It will create a nested stack with all dependent resources. The life cycle of each component of a stack can be managed by updating parent stack. It will detect the changes from all nested templates and execute the changesets.

Cloudformation, VPC, EC2, ELB, S3, Autoscaling, AWS Elastic Beanstalk, Code Commit, AWS CodePipeline, SNS, IAM are using here for implementing this solution. AWS Cloudformation is the core component of the infrastructure which maintains the state of all components. Our network infrastructure leverages VPC and its components for building a secure network on top of AWS. A single VPC spans across all availability zones of a region with different subnets to ensure the servers are distributed across availability zones for building a highly available and fault-tolerant infrastructure. We have a different subnet for different tiers of a web application. 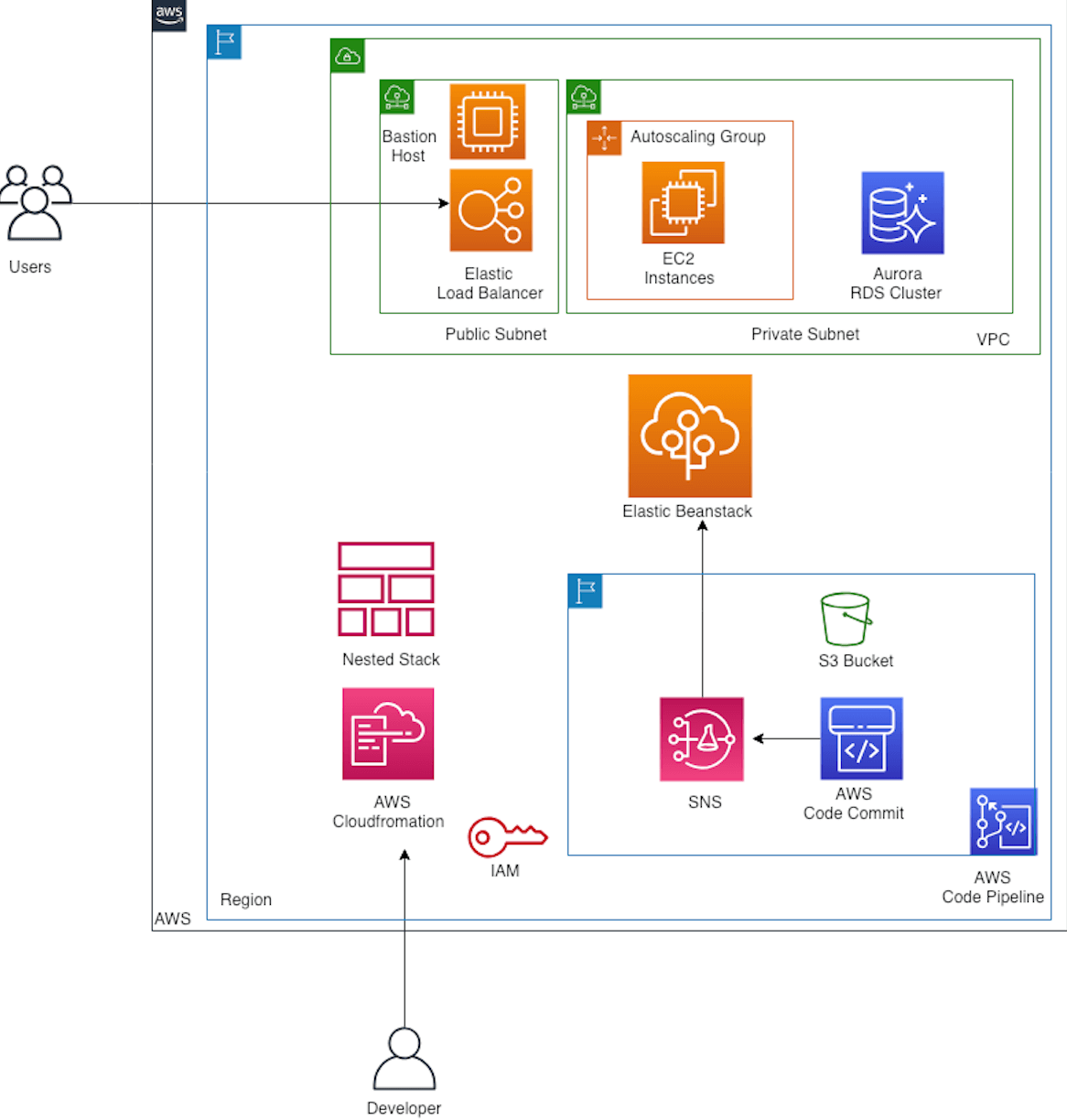 Our application is designed in a two-tier architecture pattern. Application logic is implemented in an EC2 server managed by AWS Elastic Beanstalk and Data tier is implemented in RDS. Both tiers are scalable. For infrastructure administration and maintenance, a Bastion host is deployed in a public subnet. It is a highly secured and created from a prebuilt AMI provided by AWS. It will allow ssh connection only from a trusted IP source. Application servers and Database servers are hosted in private subnets. It can be only accessed from the Bastion host. Servers can be connected only by key pair authentication to avoid vulnerabilities. App server can access the internet through NAT gateway for software installation.

Classic Elastic load balancer is a user-facing component to accept the web requests in our application. This traffic is routed to the backend EC2 servers. Backend server takes care of processing the web request and return the response to ELB which is then consumed by the end-user. ELB is deployed in a public subnet and it is secured by a VPC security group which will allow only http/https inbound traffic from external sources. ELB will only access the back end servers either by http/https protocol. To ensure high availability and uniform distribution of traffic, we have enabled cross-zone load balancing. Apart from that, we have configured the load balancer to support session persistence, maintaining idle timeout between the load balancer and the client.

We use RDS Aurora database as a database tier for the application. It is deployed as a cluster with read/write endpoints. Both servers and database instances are secured by strong security group policy to avoid access from an untrusted network source.

AWS Code commit is a source code repository for this project, It is a highly available, private repository managed by AWS. S3 bucket is used for storing the artifusted network source.

CI/CD pipeline is the core component of this project which builds the code and deploy the changes to the server. We use AWS Codepipeline for building a CI/CD pipeline.

How to create the infrastructure?

Our infrastructure is created and managed by AWS Cloudformation. Before executing the template, please follow the below instructions to create an infrastructure.

Continuous integration (CI) is a software development practice where developers regularly merge their code changes into a central repository, after which automated builds and tests are run. The key goals of CI are to find and address bugs more quickly, improve software quality, and reduce the time it takes to validate and release new software updates. In our case, we have built a CI pipeline using AWS Code Commit and Code Pipeline. It has two-three stages.

When the pipeline is triggered by a change in the configured repo branch, the very first step is to download the source code from the server to the workspace where the next set of actions to be done. Here, we have configured the pipeline to pull the specified repository name and branch. If a single-stage has multiple actions, then we can mention run order to execute a particular action in some sequences.

Depending upon the approval, the pipeline may or may not reach the deploy stage. During the deploy stage, the code is deployed in all the application environments. Elastic beanstalk deployment strategy high endorses Blue-Green deployment pattern. During deployment, users can access the application with an older version. No changes will be done in the existing servers. Beanstalk creates a new set of resources and applies the changes to the server. After successful deployment, the latest version of the application can be accessed by the users and the old servers are removed.

The basic challenges of implementing CI include more frequent commits to the common codebase, maintaining a single source code repository, automating builds, and automating testing. Additional challenges include testing in similar environments to production, providing visibility of the process to the team, and allowing developers to easily obtain any version of the application.

With continuous deployment, revisions are deployed to a production environment automatically without explicit approval from a developer, making the entire software release process automated.

How Financial Companies Can Drive Digital Transformation With Cloud?