Drupal, the open-source content management system is known for its versatility and ability to serve the needs of organizations of all sizes. Drupal.org recently launched the new version Drupal 10 on December 15, 2022. Drupal 10 offers more powerful tools for creating structured and dynamic web content with a modernized backend look and a future-proof platform upgrade. The new features include the Claro administration theme, the Olivero front-end theme, CKEditor 5, and more.

Dries Buytaert, Founder of Drupal mentions, "Drupal 10 includes many new features that appeal to developers and content creators alike. A stronger developer and site builder experience combined with easier content authoring and editing make this a key update for all users."

In this blog, we highlight the top features and improvements of Drupal 10 (Fig. 1). So let’s get started. 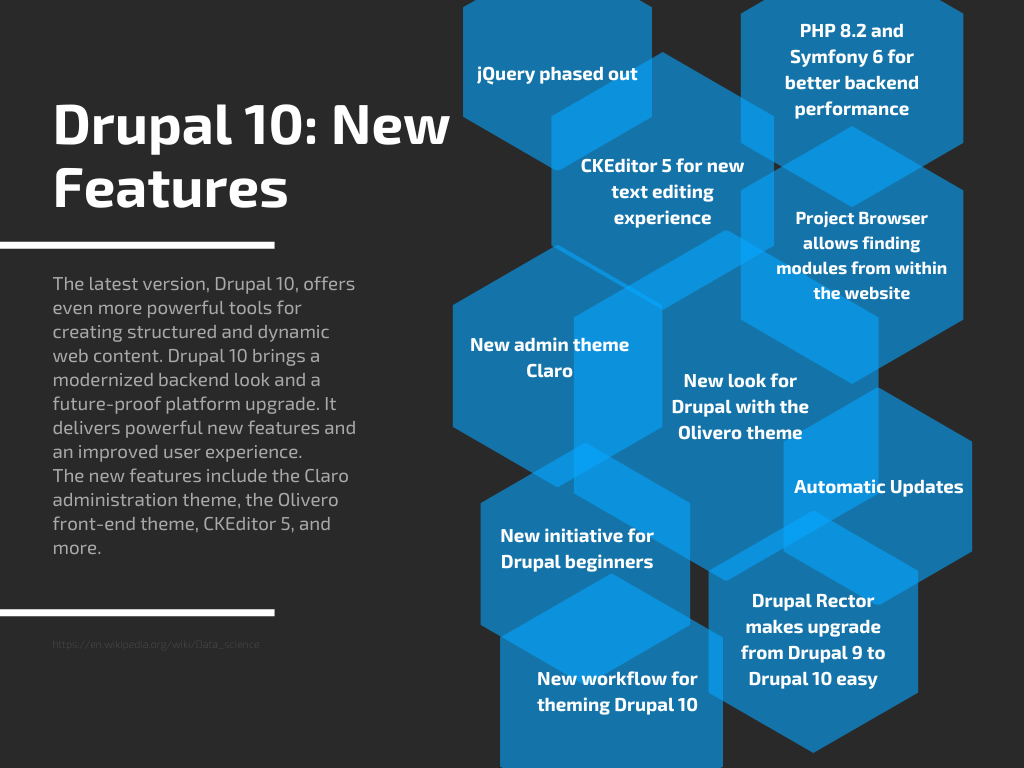 Drupal has been found to have a lower approval rating among new users compared to expert users. This led to an initiative being launched by Drupal's founder, Dries Buytaert, to address the needs of beginner users. This initiative bundles together three modules - Media, Layout Builder, and Claro - that together create a more user-friendly experience for new users. These modules have been present in Drupal 9, but they are now considered stable enough to be enabled by default in Drupal 10.

Drupal 10 introduces a new text editing experience with the upgrade to CKEditor 5. This version boasts a modern and refined look, with a simplified interface that prioritizes user experience.

CKEditor 5 does away with right-click menus, making it more touch-friendly than its predecessor. However, it should be noted that the number of options for editing links and images may be more limited in comparison to version 4. This specialization is geared towards content editors, rather than site builders, and is seen as a positive step forward in this area.

New look for Drupal with the Olivero theme

The Olivero theme serves as the face of Drupal, providing a modern and polished appearance to new users. As a core component of Drupal, it sets a high standard for other contributing themes.

One of its standout features is its accessibility, which includes a well-designed dropdown menu system that prevents menu items from extending beyond the edge of the browser.

Project Browser allows finding modules from within the website

The Project Browser initiative offers an easy way for Drupal users to discover and install contributed modules and themes directly from their website. This feature is similar to what has been available in WordPress for some time, but Drupal aims to improve upon it by automatically checking for dependencies and incompatibilities.

This is a valuable addition for small-business users and can help mitigate the issues of conflicting and crashing plugins that are often encountered in WordPress development.

Drupal 10 also introduces a new admin theme, Claro, which offers an improved user experience and a more modern appearance. While the Olivero theme is primarily used as a placeholder in most projects, the Claro theme is where users will spend most of their time.

The previous admin theme, "Seven," had become outdated by 2022 and the new Claro theme is a significant upgrade. Additionally, the team behind Claro also maintains a sub-theme called "Gin," which includes even more modern features that are not yet ready for Drupal core.

Automatic updates have been a contentious issue within the Drupal community, with some users opposed to the idea. Users do not want to spend a significant amount of time and money on updates for Drupal core and additional modules.

Development of the automatic updates feature is ongoing in a separate contrib module that is available for testing. However, it is currently limited in its capabilities as it only updates the Drupal core without causing any disruptions to the site. Updating other modules and themes is still considered experimental.

Despite the challenges, automatic updates could be a significant security advantage for small-business Drupal websites, as many sites do not install updates regularly.

Drupal 10 brings significant improvements for front-end developers, particularly those new to the platform. Customizing the CMS to match a design and branding is often the first step for developers, and in the past, this process has been known to be a painful experience.

However, with Drupal 10, the process has been made much easier. Instead of sub-theming the Classy theme, developers can now copy the starter kit theme and customize it. This eliminates the need to rely on an outdated base theme that is frozen in Drupal core.

Additionally, this change is also beneficial for themers as it allows them to keep all the files in one convenient place within their custom theme folder, rather than having to search for the files in the Classy theme and copying them over.

Symfony 6 primarily serves as a cleaning effort. It removes a lot of old, deprecated code, and therefore, developers will need to update any modules and themes that utilize outdated Symfony APIs. Once these updates are made, the website will be able to benefit from the latest PHP and Symfony improvements and offer a more responsive experience to users.

Drupal 10 phased out the use of jQuery, leading to more efficient use of native functions. The core team is taking a phased approach to the removal of jQuery from Drupal 10. They are focusing on removing plugins that are easy to remove before tackling more complex areas. Progress includes the remremoving the "jQuery once" plugin and significantly reducing UI plugin usage in the core.

Challenges that lie ahead include replacing jQuery's event handling and AJAX features with plain Javascript. Anonymous visitors will not load jQuery in Drupal 10, but it may take a few more years for its complete removal for editors and site builders.

Easy upgrade from Drupal 9 to Drupal 10 with Drupal Rector

Drupal community decided to make updates more manageable after the transition from Drupal 7 to 8. The architecture of Drupal 8+ has advanced enough to make this a reality. Additionally, the tool Drupal Rector has also played a role in simplifying updates. Though it was already available when Drupal 9 was released, it has since matured and is now even more effective.

Drupal Rector can now automatically generate most of the necessary changes for migrating custom modules to Drupal 10, saving developer time and making the upgrade process smoother than ever before.

Upgrade to Drupal 10 with all new features

Drupal has released both versions 10.0.0 and 9.5.0 simultaneously. While Drupal 9.5.0 includes many of the same changes as Drupal 10, it also includes backwards compatibility layers. It is recommended to first upgrade to Drupal 9.5.0 before upgrading to Drupal 10 for a smoother transition.

For new Drupal projects, you have the choice between Drupal 9.5.0 and 10.0.0. It is generally advisable to choose Drupal 10 for forward compatibility with future releases.

Regardless of the initial version chosen, all new features will be added to Drupal 10 minor releases. It is important to plan for adopting Drupal 10 in order to easily update to future releases such as Drupal 10.1. Would you wish to speak to our experts regarding the Drupal 10 upgrade, drop us a hello.

Why should your business upgrade to Drupal 10?

The COVID-19 pandemic has accelerated the shift towards digital, and businesses are now more…
Share
Let’s