Over the last 5 years, there has been a substantial increase in the digitalization of the world economy and Fintech APIs (application programming interfaces) have a major contribution to this digital upscaling. Financial services are increasingly adopting the use of APIs, which has resulted in a rapid burst of new super fintech apps, business models, and financial services. APIs in the digital payments landscape have been a driving factor for the fintech industry. 49% of respondents said that more than half of the organization's development effort is spent on APIs in 2021—compared to just over 40% in 2020, says Postman’s 2021 State of the API Report. The same report also underscores that it appears organizations will continue investing in APIs: 94% of respondents stated that investment of time and resources into APIs will increase or stay the same even in 2022.

There has also been a significant rise in the deployment of payment touchpoints driven by the implementation of PIDF. The total number of digital payments has also risen by 216% and 10% in terms of volume and value, respectively for the month of March 2022 when compared to March 2019, says Reserve Bank of India (RBI).

But what does it mean for fintech companies? Let us first understand what fintech APIs are before diving deeper into the subject.

What are Fintech APIs?

Application programming interface or API is a set of codes and protocols which allow different systems to interact with one another. Fintech API or financial technology API is a technology that allows data access across different parties involved in a financial transaction. These parties could be banks, websites or apps, third-party providers, and consumers or end users.

Moreover, fintech API is at the core of seamless customer experience since it renders a seamless checkout experience while also displaying transaction details across the app and on the bank’s website.

There are three types of APIs:

In the wake of new regulations for electronic payment services (PSD2), European and the Asia Pacific nations have put pressing importance on the API-driven collaboration between fintech companies and conventional financial services. These regulations make it mandatory for the banks to create and expose APIs which enable third parties to use customer data with their consent.

Three parties that are inherently reliant on API (Fig. 1), viz. banks which need to be a part of an open banking system, merchants which must let customers have a preferred choice for payments, and consumers, who want to be able to perform transactions by transferring funds through apps, share data amongst one another. Hence, the increasing dominance of Application Programming Interfaces or API in the fintech ecosystem is easy to understand. 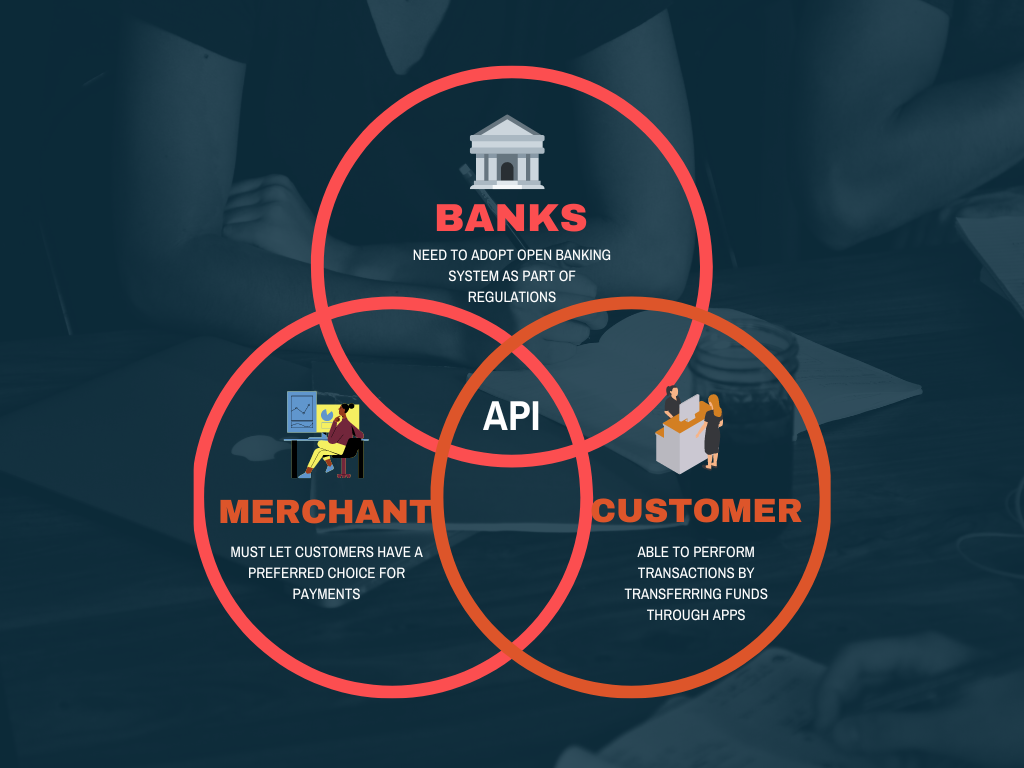 Despite being popular, API security threat is a critical concern among fintech organizations. In this insight, we aim to comprehensively discuss these challenges of API security posture.

90% of applications will have more surface area for the attack in the form of exposed API rather than the user interface, suggests Gartner. This has become a huge security concern for financial institutions and fintech companies, both of which must maintain competitiveness and customers’ trust to thrive.

Some of the most critical API security risks include insufficient logging and monitoring, broken object level, excessive data exposure, user- and function-level authorization, and security misconfiguration.

By 2025, there will be less than 50% of APIs that could be managed since explosive growth in APIs is surpassing the capabilities of API management tools. This increase in the number of API security threats prompted the Open Web Application Security Project (OWASP) to list the top 10  most serious API security issues, which are discussed below.

API Security Attacks can be Ruthless and Relentless

Increase in the usage and traffic of APIs has led to more attacks, which leave Fintech companies vulnerable. 34% of the SALT (leading security research firm that identifies API security vulnerabilities) customer accounts have experienced over 100 attacks per month in July 2022, reveals data. And another 15% have experienced 500 or more attempted attacks per month, up from 11% a year ago.

Nearly half (47%) of the respondents indicate that they have identified vulnerabilities in production APIs, 38% have experienced authentication problems, and 31% have seen sensitive data exposure and privacy incidents.

These numbers call for an urgent and immediate need to mitigate API security challenges and risks mentioned above. In the following insight, we are suggesting a technology roadmap for a winning fintech API security platform.

If you need to discuss API security with us, drop us a hello and let us wrap our head around your query to develop a feasible solution.

Banking as a Service: Embedding Banking into Non-Banking Ecosystem

Challenges and opportunities in adopting the open banking business model

Why Banks Should Take the Lead on API-Based Open Banking