How are top 10 Publishers dealing with AdBlocking?

In the last week I wrote about how the Media industry is getting affected by Adblockers. We saw that there has been an estimated loss of global revenue of $21.8B due to blocked advertising. On finding out the same we planned to do a survey of how the top 10 websites which appeal to most of the audience in the world fight against AdBlockers.

It gives us a brief idea how the giants respond to Adblocking. Given the nature and size of the business these businesses are set out to lose a good chunk of money due to Adblocking.

To get a non-biased view of the industry we took help of the Alexa ranking which gave us a list of the top ranking websites according to traffic. These websites were then chosen based on the fact that they are all news websites which display a lot of ads.

I for one always use Adblocking, simply because it is very annoying to browse a website or read something with distracting ads, not that they are irrelevant and at times when they appear in a browser I even happen to click, but for regular use I prefer a clean view. I cut it out, and I do not visit the site anymore.

This site for one, has a rigid policy on adblocking and would not allow to read the news without disabling Adblocker.

There are several types of ads which are displayed on the websites that we have documented here. I have used AdBlocker Plus extension in Google Chrome and have taken screenshots of the pages with and without ABP.

The difference can be spotted between the two images below. The one without AdBlocker has ads marked out in red.

1. BBC shows traditional ads mostly with the inclusion of ads of other products of the website. They mostly keep it clean othwerwise. 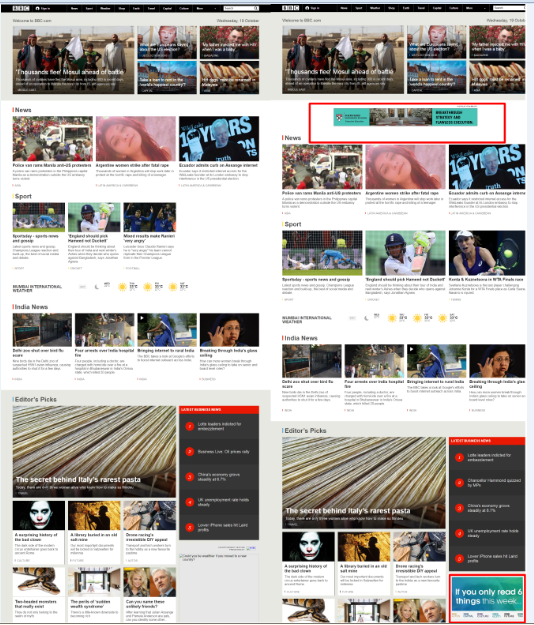 They have the regular adsense ones which are on display and very nicely blend in with the website and makes it totally bearable. 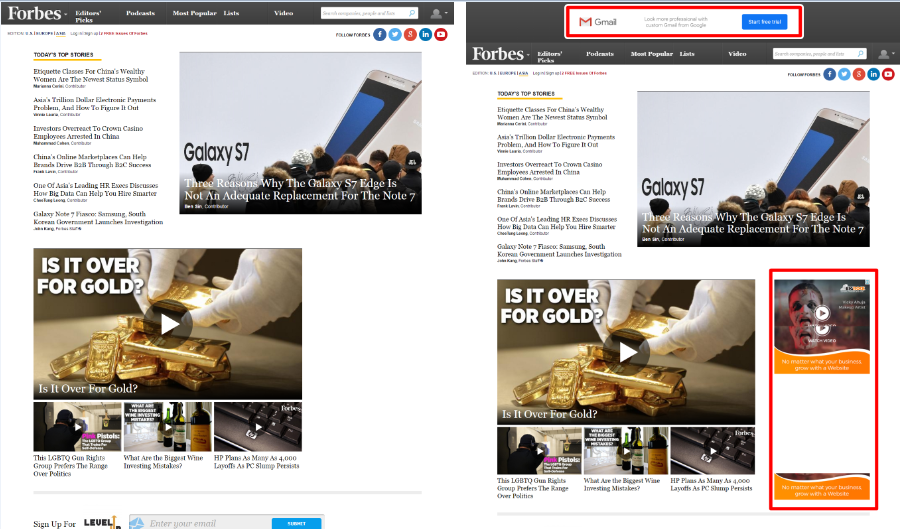 3. Fox News have a lot of ads and they are mostly promotional from the website itself 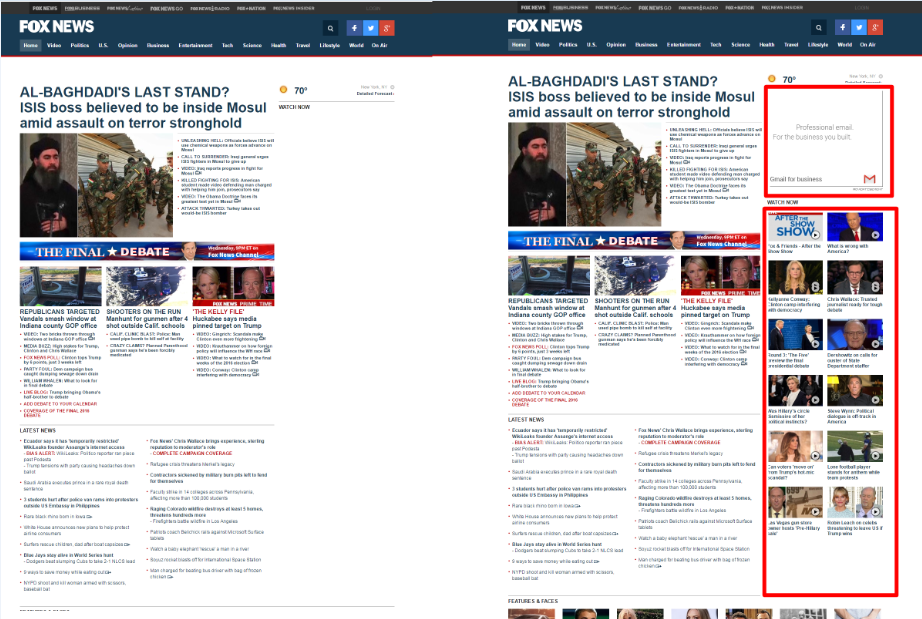 4. The Guardian - They have a super nice panel at the bottom of the page which says “We notice you are using Adblocker. Perhaps you will support us another way? Become a supporter for less than $1/£1”

Without the AdBlocker installed you will get to see ads linked with online shopping sites via Google Ads. They also ask you for a one Year subscription request similarly using a nicely placed pannel at the bottom of the page. 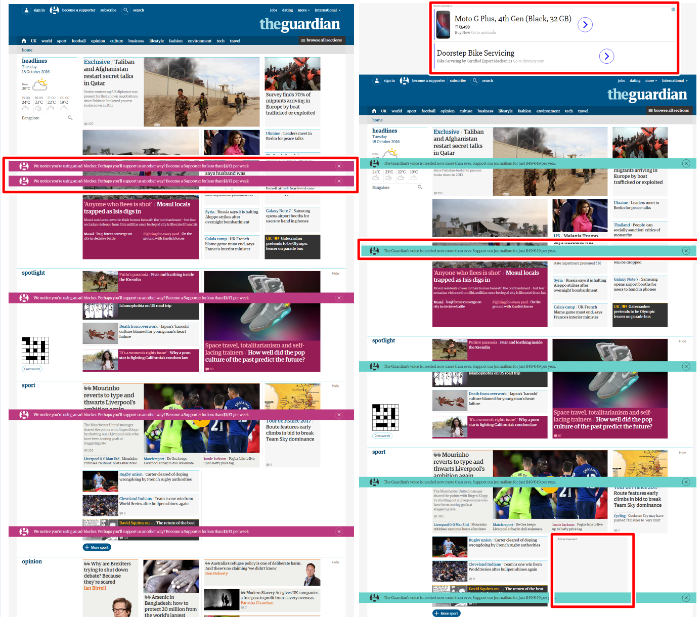 They show you Google ads and also some others, not necessarily based on searches. 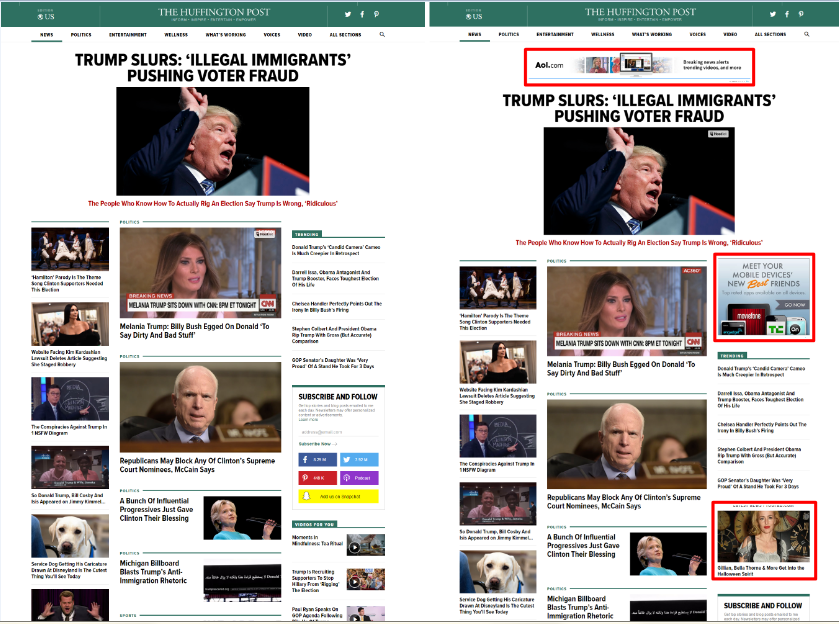 6. Indiatimes - The stark difference with and without AdBlockers is very noticeable.

Look how clean it looks without the ads on the left side of the image below.

7. The New York Times have very much blend - in and soothing ads which ask us for buying a subscription based version of the website for viewing. No other ads whatsoever are shown.

8. Reuters have minimal ads and they are from Google again. Using AdBlockers have little effect on the site, out of two ads that are being displayed, one of the ads remain. It is not annoying, and Reuters are doing it in a way that should be acceptable to the mass 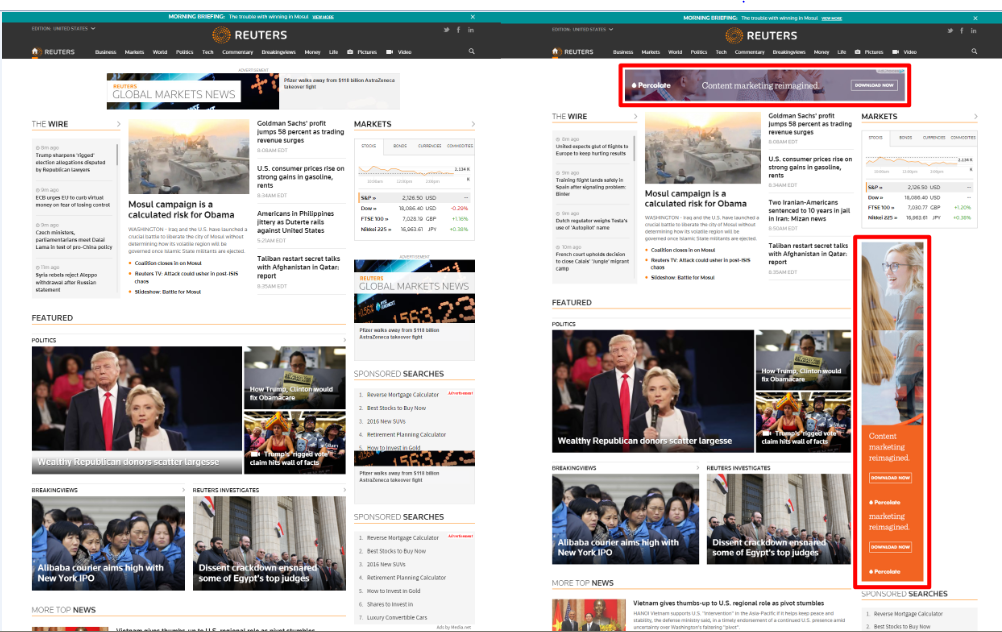 9. The Weather Channel have local traditional ads and some Google ones. A little too colorful 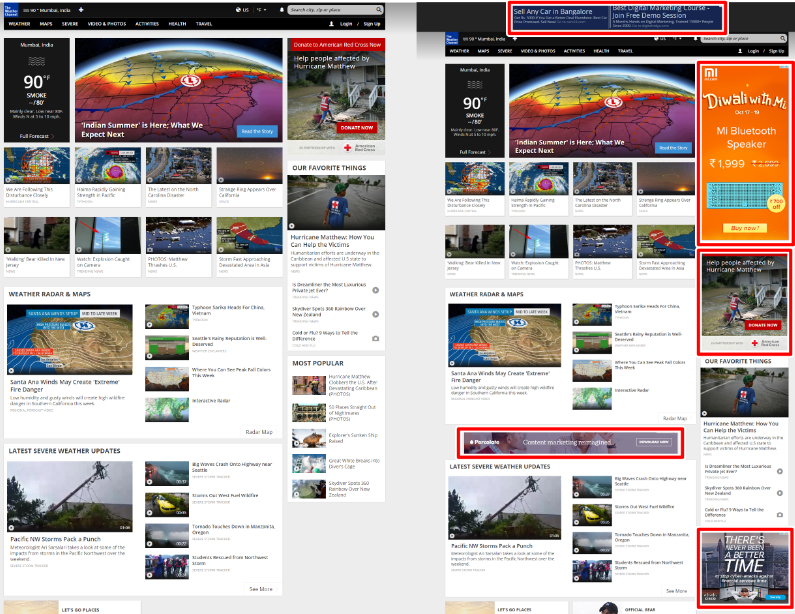 10. Yahoo! Has found out ads from searches I did a few months back! Also contains traditional ads. And a hell lot of ads of Yahoo itself. We can SEE it Yahoo, you couldn’t have been more prominent! 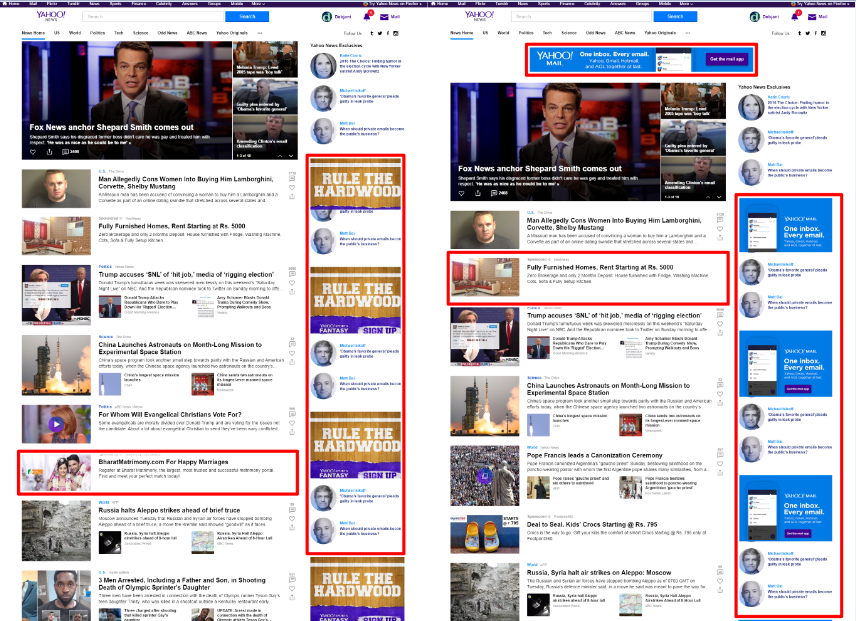 But Publishers need to understand why AdBlockers block ads. A report by Adobe and Pagefair presents the statistics.

And there lies an opportunity here which is the key, as we have seen above ads which are less annoying and distracting do not necessarily have to be omitted out except for a few users.

The report validates our finding, that the majority of adblock users reject only distracting (animations, sounds) or intrusive (popover, interstitial, non-skippable video) ads. Adblock users can be respected by serving them non-intrusive ad formats.

Disclaimer : The Websites have been arranged alphabetically and not according to the Alexa Ranking. Also, respective screenshots, logos and other identification belong solely to the companies they represent.